Maryland’s state legislature is called the Maryland General Assembly. The General Assembly has an upper and lower house (just like the U.S. Congress and Senate) and members are elected to 4-year terms. The General Assembly meets annually for 3-month sessions at the begging of each calendar year (January to April). Any new laws that get passed in this session at the start of the year go into effect on the 1st of October. So, each year at the start of October Marylanders have to adjust to new laws and 2020 is no exception. Below, I summarize some more significant new Maryland laws that took effect on October 1st.

Discrimination Based on Certain Race-Associated Hairstyles is Prohibited

Maryland law already prohibits racial discrimination in employment, housing, and other public services. Now a new amendment to this law will extend that prohibition against discrimination based on certain hairstyles that are commonly associated with African Americans. Hairstyles, specifically hair texture and afro hairstyles, are now included in the state’s definition of “race” for purposes of discrimination. This is one of the very first state laws of this type in the entire country. The law applies to all Maryland employers with 15 or more employees.

Ban on Housing Discrimination Based on Income Source

This new law bans housing discrimination based on income sources, specifically when an applicant’s income source is from government housing subsidies. This means that landlords can no longer have a blanket policy in which they refuse to accept “section 8” or other types of public subsidized housing vouchers.

A new law, known as the 2nd Lieutenant Richard Collins III law, expands the legal definition of a “hate crime.” Under this new law, racial hate does not need to be the sole or exclusive motivation in order for a violent crime to be prosecuted as a hate crime. As long as racial hatred is found to be one of the motivating factors behind a crime, the hate crime statute will be applicable.  This law was passed in response to the 2017 murder of Richard Collins, III, a Black college student on the University of Maryland campus. Collins was murdered by a white student. Prosecutors charged him under the hate crime statute. The judge dismissed the hate crime charges because prosecutors could not prove that racial hatred was the only motive.

In another new bill, Maryland’s hate crime laws were expanded to include placing or inscribing items and symbols associated with hate, such as a swastika or a noose, on another person’s property with the intent to threaten or intimidate. So if a group of kids spray paint a noose on the front door of a black student (or presumably any student regardless of race) they could potentially face felony hate-crime charges.

Another new hate-crime related law was passed which requires additional police training. The Maryland Police Training and Standards Commission is now required to train entry-level police officers on reporting and responding to hate crimes. They are also required to ensure in-police training every three years.

Strangulation is Now an Automatic Felony

To clamp down on domestic violence, Maryland passed a new law that makes any type of assault which involves strangulation an automatic felony. This means that in a domestic abuse situation if the abuse involves choking or strangulation the offense will be elevated from a simple assault to a felony crime.

Driver’s Cannot be Suspended for Failure to Pay Fines

This is a big deal for a lot of people. Unpaid court fines and fees are no longer grounds for suspending a driver’s license. Individuals who owe over $150 and cannot afford it may qualify for a payment plan. This law retroactively applies to individuals with suspended licenses for failure to pay fines and fees.  Governor Hogan signed this bill?  He is definitely running as a new school/old school Republican for president in 2020.

Inflicting emotional distress on a vulnerable adult is now a punishable offense. Individuals who commit this offense are subject to years in jail or fines up to $10,000. This law covers making maliciously deceiving statements, inflicting harm on a vulnerable person’s pet, or sharing their personal information.

Maryland has passed new laws aimed at addressing unequal pay for women. Under the new laws, a job applicant can now request a “wage range” statement for a position they are applying for. The employer is obligated to comply with this request. Also, employers are no longer permitted to ask applicants about their prior wage history or use their wage history to determine what wage to offer. 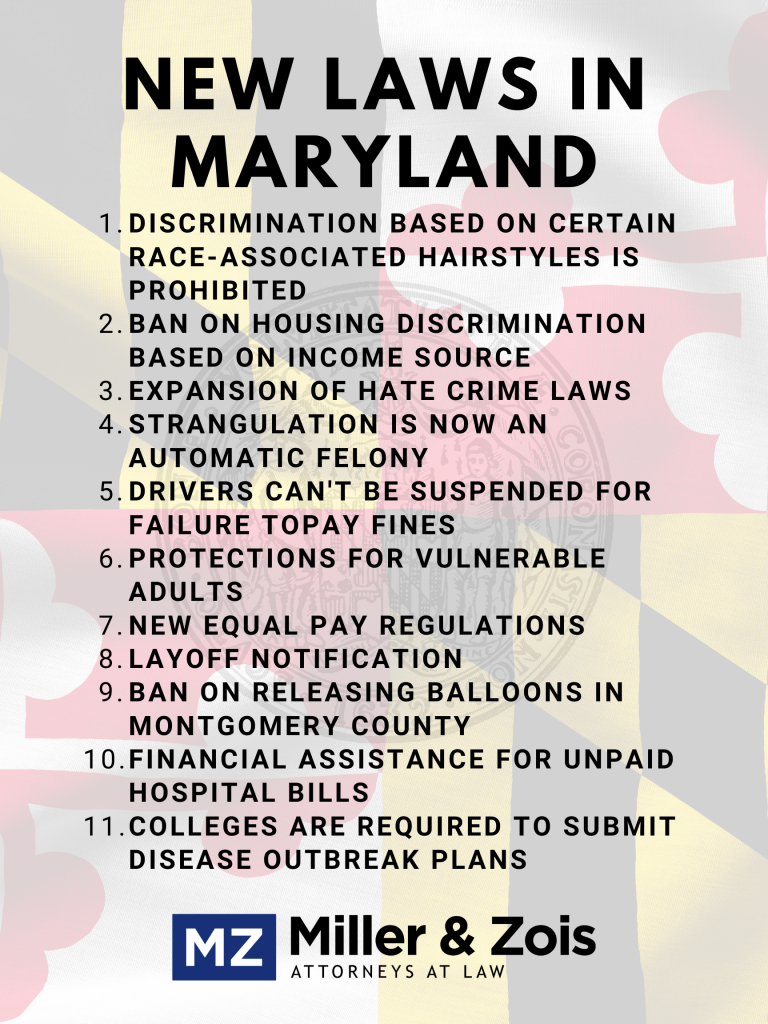 Many companies are now required to give a 60-day notice before shutting down or relocating. This applies to industrial, commercial, or business enterprises with over 50 employees.

Montgomery County has prohibited events involving the release of balloons into the air. This intends to protect wildlife and the environment. Individuals violating this law are subject to a $500 fine for the first offense and $750 for each subsequent offense. This law exempts children who release balloons without an adult’s consent. It also exempts individuals who accidentally release a balloon. The law still permits indoor balloon release events.

Families 200% to 500% above the federal poverty line may qualify for financial assistance from hospitals that treat uninsured patients. The hospitals must provide discounted or free care to these individuals. This law intends to help patients ineligible for Medicaid, but struggle to pay out-of-pocket expenses.

This law requires public universities and colleges in Maryland to submit a disease outbreak plan to the state’s health department every year. This law responds to a 2018 adenovirus outbreak at the University of Maryland, College Park. The virus infected over 40 students and killed one.