Is Past Consideration Enough Under Maryland Contract Law? 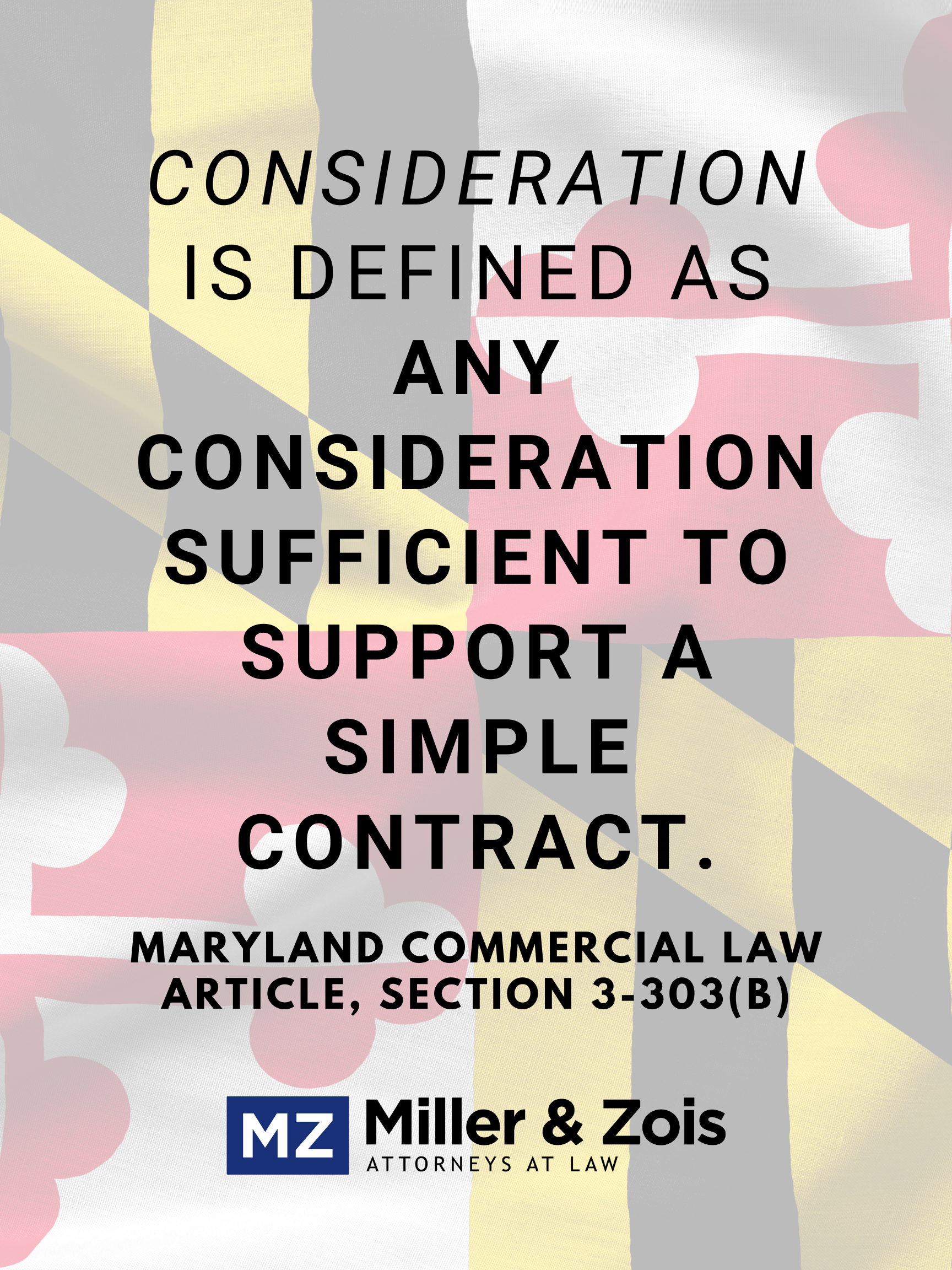 Compromise of Dispute as Consideration Under Maryland Law

Sometimes, deals are done to make everyone happy to avoid future disputes.  This usually involves giving a party something additional outside of the original agreement to make them happy and settle any future arguments. Do these agreements have adequate consideration?  The answer generally is yes. A compromise of a dispute may be consideration for an accord and satisfaction for legitimate disputes made in good faith.

Maryland contracts require legal consideration before a contract is formed because the law wants to enforce contracts, not promises. Courts do not want to enforce unilateral promises that do not rise to the level of an enforceable contract. So consideration is required to ensure both parties to the agreement incur a burden or obligation.

What Is a Contact Without Consideration Under Maryland Law?

A contract without consideration under Maryland law is nothing more than a broken promise. Maryland court do not encourage broken promises. But they are not legally enforceable without a contract.

An attorney agreed to provide legal services for monetary compensation. His client refused to pay him the total amount due, which caused monetary damages. The attorney alleged breach of contract and inadequate consideration against his client. The client denied the allegations. He argued that the attorney’s acceptance of partial payment barred the lawsuit. The client also argued that their contract was too ambiguous to legally obligate him to pay the attorney fees. This case settled for $10,600.

A woman created a living trust. She and her husband were its co-trustees. Her son moved into their home and cared for her husband. After her husband died, the woman named her son a co-trustee. She did this with the understanding that he would care for her for the rest of her life. The woman provided her son a $50,000 loan from the trust. It was to be paid on demand. Three years later, her son told her that her daughter would provide care instead of him. After moving in with her daughter, the woman found out that her son spent the trust money on personal expenses such as new cars and converted trust property. She then removed him as a co-trustee. Three months later, the woman also requested payment for the loan. Her son failed to pay it back. The woman then filed suit. She alleged breach of contract against her son. He admitted failing to pay her back but denied liability. He argued that he rightfully owned her home. The judge found that the man breached his duty by failing to provide adequate consideration. He ordered that the woman receive compensation that totaled $1,401,000.

2010 – Colorado
American Oil & Gas agreed to have Hess acquire their outstanding shares. Many of their shareholders opposed this merger. They argued that this agreement forced them to trade their American stock, whose value was increasing, for Hess stock, whose value was decreasing. The shareholders filed suit against American. They alleged that it failed to receive adequate consideration for them and failed to disclose information on the merger. This case settled for $200,000.